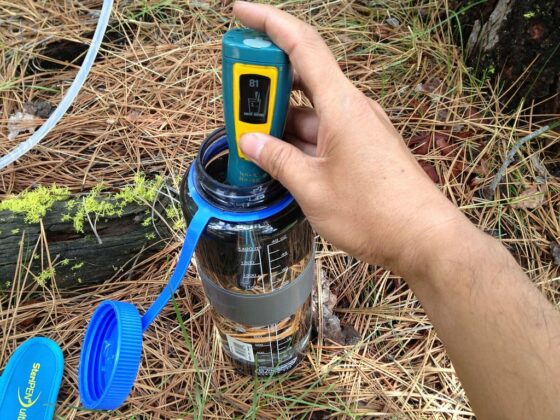 It is very important to have safe drinking water while in the backcountry. For that reason most backpackers carry along a water filter or water purifier.

A water filter removes most particulates and pathogens from the water, such as Giardia and Cryptosporidium. It does not protect against water borne diseases or viruses. Fortunately, in most North American Wilderness waters, these are rare.

Water filters should remove particulates as small as .2 microns – the size of the smallest element in the filter.

Filters come in many sizes and price ranges.

A water purifier takes the additional step of removing viruses from the water.

A new water purifier has come out recently, which uses Ultraviolet (UV-C) light rays to sterilize water and destroy viruses, bacteria and protozoa including Giardia and Cryptosporidium It is called the SteriPen Water Filter, and runs from four alkaline or Lithium AA batteries. Four AA batteries will purify 20 to 40 8on glasses of water.

How did SteriPen get started?

Many municipalities use UV light to purify their water and the Center for Disease Control and The Swiss Federal Institute of Aquatic Science and Technology – through the site SODIS – recommend a method of solar water disinfection which is as simple as putting a plastic bottle in the sun for up to 6 hours. In this later method both the temperature of the water and ultraviolet radiation work to eliminate pathogens.

In 1999 Hydro-Photon, Inc came out with the SteriPEN a small portable UV light that backpackers and travelers can use to treat water. This handheld device is the fastest way to purify water in the backcountry or when traveling abroad. 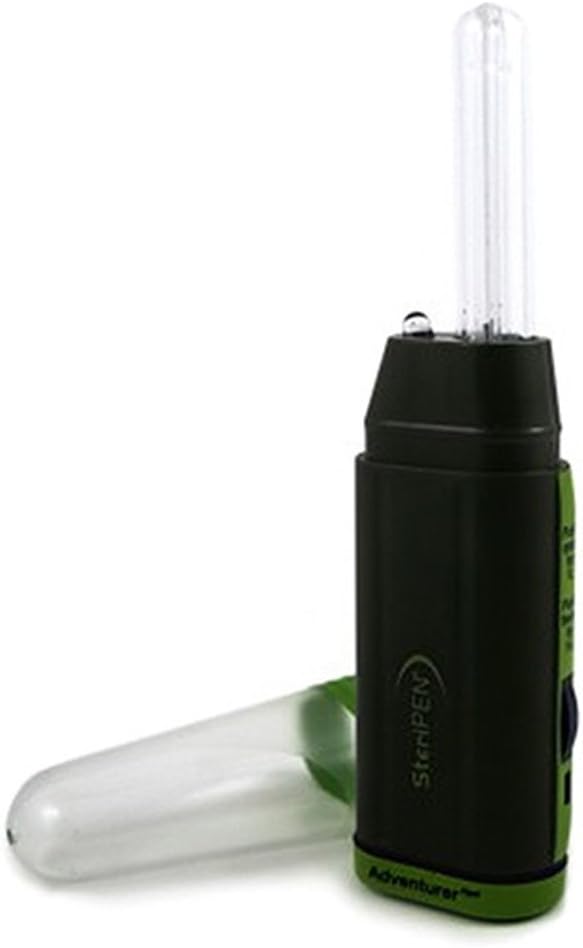 How Does Ultraviolet Light Treat Water

Ultraviolet light purifies water by irradiating the genes of the virus, bacteria or protozoan hikers worry about. In doing this it destroys the DNA so the organism cannot reproduce. Since it cannot reproduce it does not multiply in the intestines and simply passes through them causing no ill effects.

For ultraviolet purification to work the water must be relatively clear. If the water is too murky then the UV light cannot effectively pass though all the water.

So someone planning to hike or travel somewhere where the water is turbid would do better using another method to treat it or find a way to filter it so it is relatively clear. SteriPEN offers a 4 micron filter for water bottles but DIY’ers have used coffee filters and panty hose effectively.

Pathogens Destroyed by the SteriPEN

The SteriPEN works against Giardia, Cryptosporidium, and all types of bacteria and viruses, according to the manufacturer.

The SteriPEN is easy to use, one method is simply to fill a water bottle and then stir, shake or agitate the bottle so the water swirls around the lighted part of the pen. The light will not treat the water around the threads of the bottle so wipe these dry. Another method is to fill a cup or pot with water, stir it with the pen and then either drink the water or transfer it to another container.

Set the pen for one of two amounts of water, either a half-quart or quart, and it operates for a predetermined amount of time, around a minute for a half quart and 90 seconds for a full quart. The water is then safe to drink.

For backpackers, this is as close as one can get to drinking directly out of a stream without having to worry if there is something in there that could cause illness. Simply dip a cup, use the SteriPen and drink. The water will still be cold (assuming it was cold in the first place) and if hiking close to water there is no need to weigh down a pack by carrying a bottle of water.

Travelers to foreign countries will appreciate the ease of using ultraviolet light as well for purifying water. No longer does one need to buy bottled water as tap water can easily be treated in the hotel room or even in a restaurant.