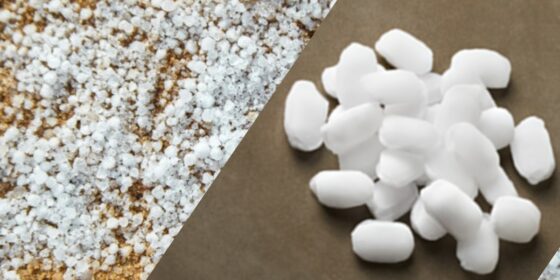 When water contains a high concentration of dissolved minerals, it is considered to be “hard.” Water softeners eliminate water hardness by bringing minerals together and are thus used to soften the water in our homes, businesses, and pools.

Water softeners are available in pelleted or crystal form, and deciding between the two might be challenging if you don’t grasp the differences in their application.

Why should you be concerned about minerals in your tap water?

In addition to influencing the flavor of your tap water, dissolved minerals such as iron and magnesium can cause plumbing problems by generating scale accumulation in the water pipes. This can restrict water flow to your delivery systems, lowering the efficiency of your dishwasher, water heater, furnace, and water pump.

Hard water also reduces the effectiveness of cleaning products such as detergents and soaps, resulting in yellowing or discolored laundry, as well as stained dishes and sinks.

The water in your faucets is made up of more than simply hydrogen and oxygen. Minerals and salts may also be present. The presence of these different compounds in the water you drink can cause damage to your appliances.

Furthermore, it dehydrates the skin, makes house cleaning difficult, and increases the amount of hair shampoo and conditioner needed to clean your hair and body, not to mention making washing off cleaning product residue difficult.

Water softening is a good technique to deal with this problem. Water softener pellets or crystals are substances that keep a water softening system running. Let’s take a closer look at how these crystals work.

The type of salt you use in your brine solution will impact how well your water softener works.

Salt crystals and pellets both soften water, but pellets cause fewer issues in the long run.

Crystals perform well in two-part water softening machine. Pellets, on the other hand, should be used if you have an all-in-one softening unit.

Crystal or coarse salt is commonly known as “rock salt.” It is a mined substance that is extracted from subsurface salt deposits. It is approximately 98.5 percent pure as a natural product. The principal contaminant is calcium sulfate, which does not dissolve in water and instead settles to the bottom of the brine tank as sediment when the water softener regenerates.

Crushed coarse rock salt is packed and sold. Because rock salt takes less processing than pellet salt, it is typically less expensive. It also contains many other minerals that might leave a residue in the brine tank.

If you have two-part water softening machine, salt crystals can be a great option. It can also be a suitable option if you have a low daily water consumption.

On the other hand, Crystal salt should not be mistaken with solar salt crystals, a more expensive 99.5 percent pure product manufactured by evaporating saltwater with sunlight.

This type of salt is made by evaporating sea saltwater. Salt crystals are left behind after water evaporates. As a result, they are also known as water softener crystals.

Solar salt contains 99.5 percent pure sodium chloride and is more soluble than rock salt. Because it results in less buildup, using a water softener crystal will extend the life of your water softening system.

Salt crystals should never be used in a system that uses a lot of water because they can induce bridging. It is not recommended that you use it if you have an all-in-one water softening system.

Because it is the purest form of salt, it is the most expensive sodium-based salt. It is produced in two phases. The raw salt crystals are converted to sodium chloride in the first stage. Heaters are employed in the second stage to remove surplus moisture.

They are available in pellet form and are thought to be the most effective in softening hard water.

Water softener salt pellets can help you improve your experience with hard water softening in a few ways.

Some of the advantages you are likely to obtain from using salt pellets are as follows:

The salt pellets are made up of 99.99 percent pure salt. They are also thought to be the best food-grade salts for water softening needs. The salt is cleaned before being compacted into pillow-shaped pellets. As a result, it would be the purest form of salt. Because salt pellets do not leave any residue in the tank, they are regarded as one of the best solutions for your water softening needs.

Salt pellets could be a good solution if you want to eliminate the bridging effect in your water softener. For removing material buildup prospects, these salts are typically combined with citric acid. Citric acid-added pellets may be one of the best solutions for practically all of your long-term protection needs.

Another distinction is that coarse rock salt is typically offered without any additives. On the other hand, Pellet salt manufacturers offer products with additional compounds that help clean the softer and remove low iron levels in the water (less than two parts per million). Different salts operate with different types of softeners.

Is it okay to mix water softener salt crystals with pellets?

Most water softeners function well with all types of salt, and mixing different types of salt is not harmful. However, depending on the design of a specific softener, some salt kinds may be more appropriate.

Because the brine tank is easily accessible for cleaning, the side-by-side machines with independent brine tanks can work with rock salt or pellets.

Because all-in-one cabinet-style softeners are difficult to clean, pellet salt is preferable because it contains few insoluble contaminants that might produce silt.

Pellets are typically recommended by manufacturers of all-in-one or single tank softeners. Because the resin tank is located inside the brine tank, salt crystals may harden, resulting in a “crust” surrounding the resin tank. As a result, the tank may be unable to descend to the water level.

Homeowners who use softeners with no salt screen on the brine tank’s underside may be advised to use pellets to prevent crystals from sucking into the brine draw line. Overall, it is best to follow the manufacturer’s instructions regarding the types of salt to use in your water softener.

Can I substitute salt pellets for crystals?

Salt pellets are the best alternative for practically all of your needs in water softening equipment. They will prevent bridging and have been reviewed as outstanding options for improving the best grade soft water performance criteria. As a result, salt pellets can be used instead of salt crystals.

In general, salt crystals are highly suggested in circumstances where very little water is used. If you use a lower amount of water or have a two-part water softening system, adopting a salt crystal option can be one of the best solutions. Salt pellets might be a great salt choice to go with if you have an all-in-one water softener system at your home because they can help you prevent bridging.

Hard water can cause damage to your appliances as well as your skin. So make sure your water softening systems are in good operating order. To improve efficiency, fill your brine tanks on time and use the best water softening crystal or pellet.