Why Does Boiled Water Taste Different?

Water, by definition, does not have a distinct flavor – it is typically boring – yet it is a crucial aspect of life since it quenches our thirst and rehydrates our bodies.

Keep in mind, however, that not all water sources are clean, so you would need to boil them to remove any microorganisms that could cause a health problem. 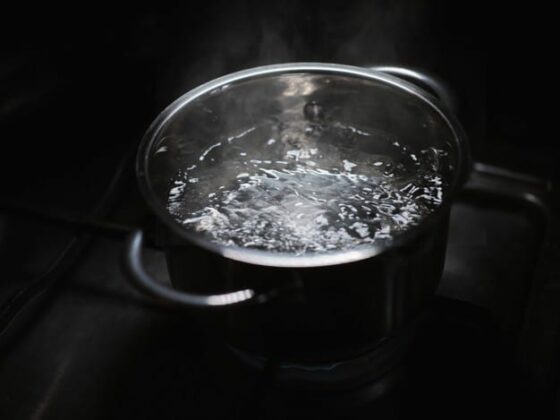 Back to the topic, water does not have a distinct flavor, but the container in which it is stored can affect its flavor, which we will discuss in this article.

Why does my water taste funny when boiled?

Is it true that heating tap water improves the taste?

But if you’re asking yourself, “Does boiling tap water improve the taste?”

The answer is tricky since there is a mixed reaction to the water’s taste change after it has been boiled.

Does all boiled water taste the same?

The key claim for the latter is that boiling the water removes the dissolved oxygen and gases in the water solution, resulting in water that tastes flat.

In the case of the former, the water tastes better after boiling because the chlorine in the water has been removed.

Aside from gas and chemical molecules, another issue to consider, as previously noted, is the container used to hold the boiling water.

The boiling water will taste foul if the water container is not thoroughly cleaned.

If you want good-tasting boiling water, clean the containers first before filling them with water.

How can you improve the flavor of boiled water?

As previously said, the water has a propensity to taste flat because of the release of gas or air molecules in the water.

To improve the flavor of boiled water, aerate it by pouring it back and forth many times.

Here are the procedures to properly improve the taste of your boiling water:

There are other ways to improve the flavor of water:

To improve the water flavor, you should reintroduce air molecules, so they do not taste flat.

You might also use powder mixes or electrolyte tablets as an alternative way to improve or enhance the taste of heated water.

Before delving further into this article section, let us first define Twice-Boiled Water. The easiest way to explain twice boiled water is boiled water that has been allowed to cool before being re-boiled.

Is it OK to boil water twice?

In general, boiling water, allowing it to cool, and then reboiling it poses little risk to one’s health. However, it’s best not to let the water boil down, which concentrates minerals and pollutants, and if you must reboil water, do it just once or twice rather than making it a habit.

Re-boiling changes the chemistry of the water. You are safe if you use purified, distilled, or ionized water. If you are working with faucet water, you need to be cautious because there are occasions when re-boiling is completely normal, but bear in mind that you should not leave it boiling for more than 20-25 minutes.

This is due to the possibility of concentrating unwanted substances such as nitrates, arsenic, and fluoride into the heated water.

While re-boiling is not typically a problem, it is not an ideal solution due to the possibility of increasing the concentration of specific elements that represent a health risk. Therefore, if you intend to re-boil water, do so once or twice, and don’t make it a habit for your safety.

If you are pregnant or have a damaged immune system, avoid re-boiling water since you may become exposed to health problems if you eat re-boiled water.

For health and safety concerns, it is recommended that you make a new batch of hot water rather than re-boiling what you have already boiled.

Re-boiling is acceptable, but it should not be done frequently. Instead, re-boil when you think it’s necessary to re-heat the water you’re using. Keep in mind your present health status since this will determine whether or not you need to re-boil.

Is it possible to purify tap water by boiling it?

Boiling purifies tap water. This ensures that water is safe to drink even with biological contamination. In addition, boiling water kills bacteria and other organisms that have been present in the water, removing some potential health risks.

ADDITIONAL NOTE: It can take up to half an hour for boiled water to cool down for drinking and cooking purposes, so plan and boil more water than you need in one go.

According to Alberta Health Services, properly boiled and stored water is safe to drink for 6 months if the containers are well-sealed. The general agreement appears to be that boiling the water sanitizes it, and then storing it in a well-sealed, cleaned container keeps it sanitized for months.

What if the boiled water tastes flat?

Water can dissolve a wide range of substances, including air. When water is boiled, the dissolved air leaves the water, leaving it with a bland taste. After heating the water, aerate it by pouring it back and forth between two containers a few times. This adds air to the water, which improves its taste.

To summarize this article, boiling water changes the flavor because it changes the molecules in the water solution – this releases gases such as oxygen and the like, resulting in the flat taste of boiled water. Keep in mind that the container impacts the taste of the boiling water.

While drinking twice-boiled water isn’t a bad idea, it shouldn’t become a habit because it increases the concentration of dangerous substances in the cooking water.

Last but not least, boiling tap water removes germs and other unwanted creatures.

The bacteria are eliminated by the heat given to the water, making it suitable and safe for consumption or use.