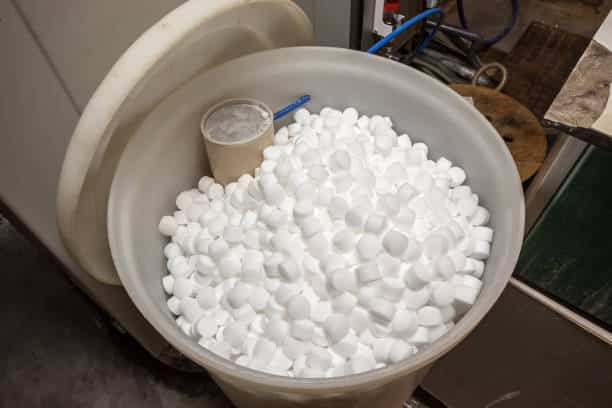 For salt-based water softeners, salt acts as a fuel. Water softeners, like gasoline or diesel-powered automobiles, require a regular supply of salt to operate. The salt, on the other hand, does not feed the system. Instead, it cleans the resin beads throughout the regeneration cycle.

In a nutshell, without the interchange of sodium ions and hard minerals, water softening would be impossible. When a water softener runs out of salt, it loses the capacity to renew the resin in the water softener.

This means the resin will no longer be able to remove hard ions and iron from your water, resulting in hard water and iron stains on surfaces where the water settles.

Disadvantages of salt running out

Stains on your sink faucets and showerheads caused by hard water

Your water faucets and showerheads may quickly acquire a white chalky stain that is difficult to remove and may require the application of a hard water stain remover.

This white coating will gradually form on glass, mirrors, and walls exposed to the water pouring out of your showers, making your glass shower walls appear frosted over.

Your sinks and bathtubs are stained with iron

Yellow, orange, and brown stains will appear around the sink and shower drains, as well as everywhere else where water settles.

Hair that is stringy and brittle

Because of the harsh minerals in your water, your hair will feel stiff and brittle.

Irritation due to dry skin

Because hard minerals settle on your skin after you use water, your skin may get red and inflamed.

I don’t think I need to explain what limescale is if you got a water softener to cope with hard water in the first place. This sticky, streaky substance may be a pain to clean and can impact the aesthetic of your house as well as the function of your appliances.

Hard minerals can obstruct water flow if they collect on the inside of your pipes, and your softening system is no exception. The only water that flows through the control valve in a brand new water softener has already been softened. This implies it doesn’t include any hard minerals that might harm the softener.

If your water softener runs out of salt, however, these hard minerals get access to the control valve’s critical components, including the piston chamber.

An overflowing brine tank is a less common yet important issue to highlight. Your system will fail due to air or water leaks, resulting in an overflow of water in the brine tank.

Obstructions on the float control might also cause problems. Remove the brine assembly if it becomes clogged with salt or dirt, rinse it, and check that it is working correctly. The brine float may enable water to fill to capacity, resulting in an overflow. This might cause water damage to your house.

The water has not been softened

The most obvious problem with running out of salt in your water softener is that your water will not be softened. It’s a waste of money to have a water softener that doesn’t truly soften your water. Why pay for something you’re not getting any use out of?

Your water softener will not work without salt. Your water quality will be poor, and you’ll likely have troubles throughout your house, including problems with your dishwasher and water heater.

Buildup of limescale in pipes

Limescale is one of the most common problems associated with hard water. You may be able to scrape the stains away from the areas you can reach, but you won’t be able to remove the limescale accumulation inside your pipes.

When limescale builds up in your pipes, it can slow down the flow of water. Because limescale creates friction and drags water back as it runs through your pipes, you may notice a decline in water pressure.

Presence of iron in the water

Hard water minerals are frequently seen in conjunction with iron. While this mineral does not create limescale, it does cause difficulties of its own.

Low quantities of iron may be removed by most water softeners. If your water softener is out of salt, however, there will be no sodium ions for iron to exchange with. When this happens, iron will persist in the drinking water in your home.

Do you need to replace salt in your water softener regularly?

You can check the salt level in your water softener by opening the brine tank and looking inside. If the salt level is less than half full, it’s time for a refill. The salt should ideally occupy roughly three-quarters of the tank’s capacity. Too much salt will inhibit the system from fully renewing.

Most water softeners may function with a range of salt types, including rock, pellet, solar, and “evaporated” salts. Regardless of the source, all rock salt contains insoluble debris that settles at the bottom of the salt storage tank and must be cleaned out on a regular basis.

If you use purified salt products, you’ll have to wipe out the salt storage compartment less regularly, but you’ll have to check for bridging more frequently. The type of salt you need for your system is determined by the type of softener you have and your own preferences.

Your service provider can help you figure out which salt is right for you, as well as how much you’ll need based on your system, water use, and water hardness in your home.

Can a water softener work without salt?

A water softener that runs out of salt may be significant pain for consumers. Salt-free systems, on the other hand, are a good alternative to prevent such scenarios. Ion exchange is not used in these water softeners to soften hard water. This means you won’t have to buy salt bags on a regular basis or locate a storage space for them.

How can I keep my water softener from running out of salt?

Now that you understand what occurs when a water softener runs out of salt, it’s time to learn how to avoid it.

Make use of a smart system

Many of the most recent water softeners come with a smart control valve that can be connected to your phone through Bluetooth.

This app keeps track of the salt levels in your water softener and alerts you when they are low.

Getting a water softener with a smart meter can help you become more familiar with your equipment and how it works, so you’ll be more likely to notice when anything isn’t working properly.

You may still remind yourself about salt refills if you’ve previously purchased a water softener and aren’t ready to invest in a new one. Simply open the calendar app on your phone and set a reminder to check the salt level.

It’s a good idea to check on your water softener salt a few weeks before it really runs out. Make it a part of your maintenance assignment to create another reminder for next time once you’ve checked the system and filled up the salt level as needed.

In addition to putting a reminder on your phone, it’s a good idea to personally inspect your water softener between top-ups for further peace of mind. Make it a practice to monitor the brine solution at least once a week.

Once you know what your brine solution should look like, you’ll be able to predict when the salt tank will need to be refilled. Knowing when the tank has to be refilled by sight helps reduce the chances of your water softening system running out of salt.

Always have enough salt on hand

If you forget to refill your salt tank, or if you underestimated how much sodium your softener would need, having additional salt on hand is critical. You may add salt straight to your salt tank whenever you need it.

Finally, get in the practice of topping off your salt whenever you see it is running low, and you will be less likely to run out. Also, remember that without salt in your water softener, you won’t have soft water.